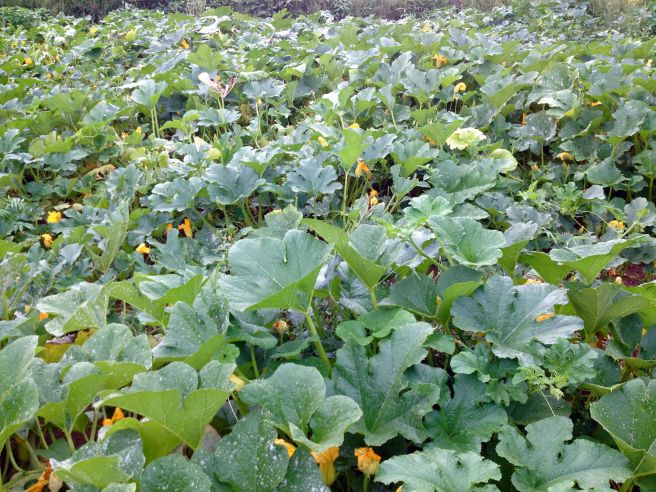 I broke ground on a new garden this year, and I will admit the goings have been mixed. Some things have been great, and others not so great.

Great? The years and years accumulation of organic composted cow manure we shoveled out of the old barn and spread on the garden. The soil is flat, nicely aerated,  gets great sun and the creek is nearby for irrigation.

The new plot is in an open, fairly unsupervised location far from human habitation and near to the creek. While it is a sizable drop to the creek from the garden, a short stroll brings you easily to a quiet pool deep enough for a hefty drink and a leisurely bath.

I planted corn, fodder beets and two kinds of pumpkins, and have been grooming a future site for a sizable strawberry patch.  While our start was a little slow due to the drought, all my little plants still did their best. The corn was promising, the beets coming up slow but sure and the pumpkins were taking prisoners.

It wasn’t long before the tiny stalks of corn had been trimmed as if with scissors; neatly, evenly and not a single plant spared.  The deer tracks left little doubt who the culprit was, and since the deer word for crack is c-o-r-n, I really can’t say I was all that surprised.

Once I accepted the fate of the corn and moved on, we had benefit of a few rains and things really started showing promise. The beets started to get big and bushy and stand up in tentative rows and the pumpkins began to vine and bloom all over the place. 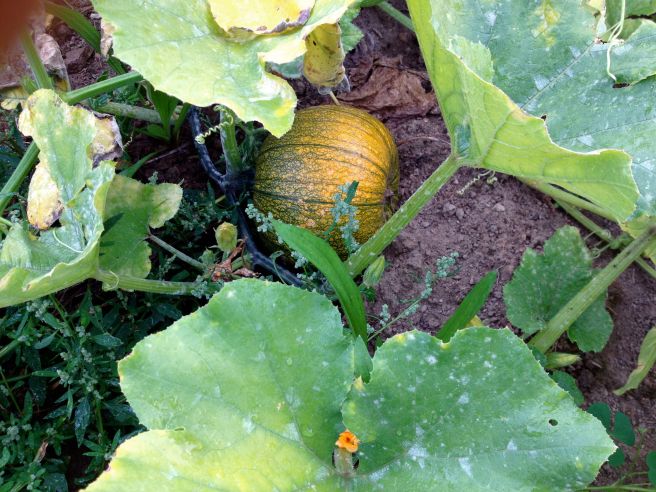 Of course the Ladies will be part of the Pumpkin-fest too – there are special fodder pumpkins for them too.

But wait – what’s that browning, dying spot in the middle of the pumpkin patch?  And what’s that?? Bite marks?? Grrrrrrr

And look at this! right in the center of the dead spot – a fresh, soft hole nestled under an umbrella of broad, shady pumpkin leaves. Talk about a short commute… 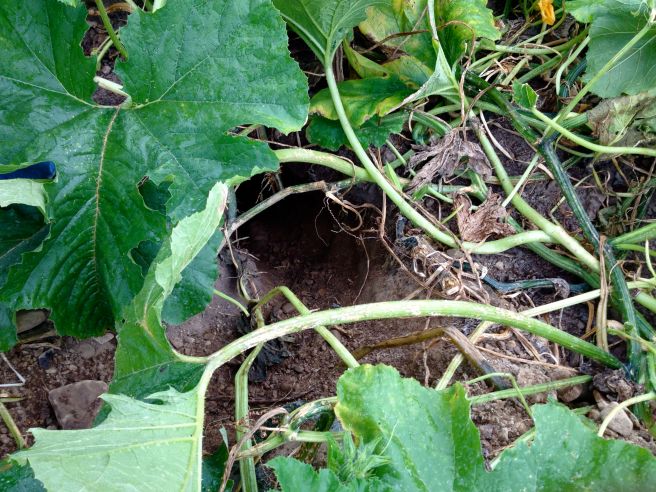 What’s cuter or more peace-loving than a groundhog? They harm no one, love fruits, veggies and sunshine and go about their gentle business of getting really, really fat. Which presents a quandary.

I like groundhogs. But, there always has to be a but doesn’t there?

Let’s start with their manners. Sure they’re shy and demure, and charming in their way.  I would be happy to share a pumpkin or two with my groundhog friends.  But be warned: groundhogs don’t want leftovers. They want a fresh pumpkin for every meal, even though they’ll eat just a few bites.  Clearly groundhog moms aren’t teaching their little hogs how impolite it is to take a bite and put it back…

And the digging! Groundhogs will dig a treacherous underground network you have to see to believe and you’d better hope that your barn or garage isn’t in the way. Their holes pose a leg-breaking menace to livestock and equipment.

So my animal-loving friends, what’s a farmer to do? I tend to be a little more lenient with the groundhogs than my neighbors. But even the most liberal urbanite-turned-country-dweller will have a crises of kindness when their peace-loving kumbaya theories are confronted with such a relentless and downright disrespectful agent for Nature.

Don’t think it could happen to you? Don’t be so sure – just ask Michael Pollan.  Read about his epic battle with our chubby four-legged vegans here. 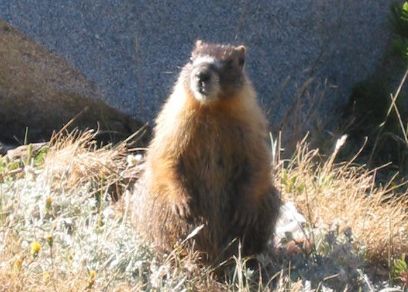 Like Scarlett O’Hara, I’m not going to think about groundhogs today, but tomorrow is coming and a decision will soon have to be made.